The Olympus 35ED is a fully automatic 35mm rangefinder camera which is also the last member of the Olympus 35 series EE (electronic-eye, which simply means automatic exposure) cameras. After Olympus introduced the flagship 35SP (the first and only spot-meter equipped compact rangefinder in the world) in 1969 as the successor of the 35LE(first of the 35 series), it released a series of stripped-down models over the years until the introduction of the 35ED in 1974. In other words, the 35ED is a close relative (sharing  similar bodies) of the shutter priority/manual exposure 35RC loved by many collectors and also a distant relative of battery-less Trip 35 (also EE/fully automatic but no rangefinder and a different body). 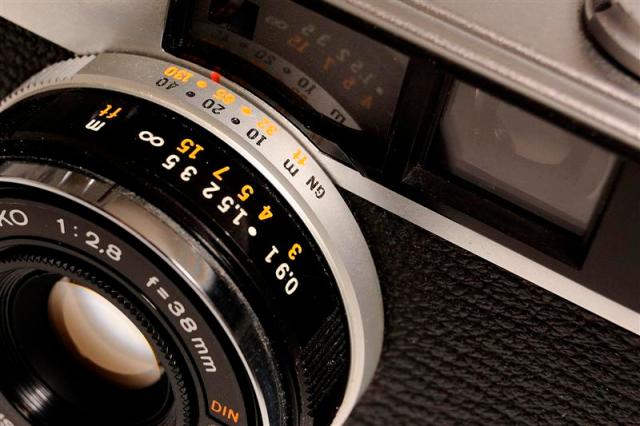 Back to the 35ED itself, it is basically a point-and-shoot in the early 70’s because all you need to do is set the correct film speed at the beginning of the roll and focus for each shot. Even flash photography is automatic for the 35ED despite of having no built-in flash because it uses a technology called “flashmatic” which sets aperture automatically according to the distance focused and a user preset flash GN (guide number, see the the photo above). Flashmatic technology predates built-in sensors on the thyristor auto flashes. Its mechanism is also mechanical and thus can be implemented on a mechanical camera and is basically compatible with all flash systems. However, it is best used with flashes with single power outputs because of the simplicity in obtaining the guide number.

To sidetrack a bit, Nikon made a flashmatic equipped non-AI lens called GN Nikkor 45mm f2.8 in 1969, a nice little pancake lens and also a great addition to any lens collection.

Being a fully automatic camera intended for family and vacation use, the 35ED has an unusually wide range of shutter speeds. In low light, the camera can do long exposure up to 4 seconds. It also has a maximum shutter speed of 1/800 seconds which is very very fast (I believe it is the fastest you can get) for a leaf shutter even in today’s standard. Just for comparison, 1/500 seconds is mostly the maximum speed for leaf shutter lenses of medium and large format cameras.

Moreover, the 35ED has an exceptionally sharp lens, most likely because of its 4 elements/3 groups optical formula (possibly the age proven Tessar design). Just to show how good it is, I resized and resampled a 2400 dpi scan of the above photo taken with 35mm Fujifilm REALA (ASA100 color negative) to a 200 dpi 10″x16″ image. Then, I made a 100% crop from it as shown below.

It is a surprise to me that a compact 35mm consumer-grade camera has such a good lens. In fact, I now believe Olympus gave high quality (higher than their intended purposes) lenses to most of its 35mm compact rangefinders/viewfinders in the same era (just like the Trip 35 and the XA).

About my Olympus 35ED…

This Olympus 35ED was given to me as a gift by the same good friend that gave me the Ricoh 500G. It is in very good condition and all I did is just put a bit of additional light-seal on its back to ensure light-tightness. To power up the 35ED, I used type 675 zinc-air hearing-aid battery (see photo below) as replacement for the banned RM-640 mercury battery. However, the 675 is smaller in dimensions than the RM-640. Solutions for adapting zinc-air/silver oxide batteries to fit cameras that require mercury batteries are available on the Internet but the previous user (the one who owned the camera before my friend) already have some metal pieces in the battery chamber to make the 675 fits.

This entry was posted in Rangefinders and Viewfinders. Bookmark the permalink.