The word “Rollei 35” can refer to a single camera (like the one above) or a series of cameras of similar designs. Nevertheless, the Rollei 35 is the second smallest 35mm full frame camera ever built, only next to the Minox 35. The original Rollei 35 was designed by German master engineer Heinz Waaske in the early 1960’s with the goal of having a camera as compact as the Japanese half-frames (e.g. Olympus PEN series) but with all the benefits of full-frame 35mm. The result is a strongly built and elegantly designed mechanical workhorse with precise German optics, electronics (the meter) and mechanics. The first Rollei 35, introduced in 1966, has a Compur made shutter, a 40mm f3.5 Tessar by Carl Zeiss and a Gossen CDS meter. Holding a Rollei 35 is thus like having “the best of the best” on your palm! No wonder the Rollei 35 (in particular, a 24K gold-plated Rollei 35S) is one of the favourite cameras owned by Her Majesty Queen Elizabeth the Second!

In 1971, Rollei transferred the production of Rollei 35 to Singapore in order to lower down the cost. The sample I owned in the photo above is a Singapore made original model. The lens is still a 40mm f3.5 Tessar but it is a true copy (licensed by Carl Zeiss, of course) manufactured by Rollei. The shutter was made by Copal and meter by Nissei instead (both are Japanese companies and thus are closer geographically to the Singapore division). After some lengthy research, I found that my Rollei 35 was manufactured in Singapore sometime in between April 1973 and September 1974. It is because Singapore made Rollei 35 Original made before April 1973 will either have a Carl Zeiss made Tessar or a Schneider made S-Xenar lens and those made after September 1974 were renamed Rollei 35T because of the introduction of the Sonnar lens equipped 35S. 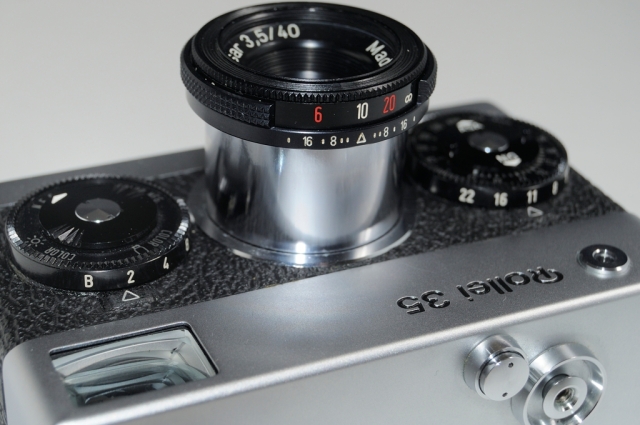 Well, I think that’s enough for the history and origin for the moment and let’s get to the technical aspect of the camera. The most prominent feature of the Rollei 35 is of course its collapsable lens. This space saving design incorporates not just the lens itself but also a precisely machined lens tube and an ingeniously designed shutter mechanism. All Rollei 35 models except for those with the Triotar triplet lens have the original shutter design with speeds range from 1/500 seconds to 1/2 seconds plus B. To further miniaturizing the lens assembly, the aperture dail (except for the Triotar models) is moved to the front of the body beside the lens. This means the dail is not in “direct control” of the aperture diaphragms like an ordinary lens and instead depends on a spring-driven lever (the “click” sounds made when moving the dail confirm this design). To keep the dimensions of the camera small, all Rollei 35 models use scale focusing and thus they are all viewfinder cameras (there is simply not enough space for a rangefinder). However, focusing is not as tough as I expected. The 40mm focal length gives more depth-of-field than a “standard” 50mm on a SLR and the depth-of-field scale on the lens is so precise that it includes almost all aperture values (see photo above)! Moreover, distance scales in both feet and meters are provided on above and below (see photo below) the lens respectively. 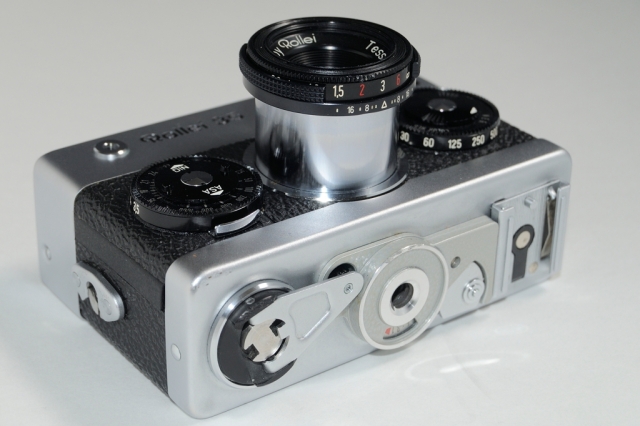 As shown in the photo above, the rewind lever, the 1/4″ tripod thread, the frame counter (located below the tripod thread) and the hotshoe are all placed at the bottom of the camera. All these placements are of course for the sake of keeping the camera as compact as possible. However, this prime goal in the design process did make the camera somehow awkward to use. First of all, the winding lever is left handed (see the photo at the top) and the meter cell is placed at a position that would easily be accidentally covered by the user’s finger. Moreover, a frame counter placed at the bottom of the camera is for sure an inconvenience. Of course, the hotshoe is the most difficult to handle because it is not a matter of getting used to but it directly affects the quality of light. To deal with this issue, the camera can be held upside down for a shoe-mounted flash. Personally, I hold the camera pre-focused with my right hand and a sync cable connected (with a hotshoe to PC sync adapter) off-shoe Vivitar 283 on my left.

Finally, we come the aspect of film loading. First, the whole camera back as a piece is needed to be detached in order to start the loading process (as shown in the photo above). The pressure plate for the film is then flipped down. After that, the procedures are just like any other ordinary 35mm camera although the feeding side is on the right with taking side on the left. This design is highly inconvenient for people who want a quick reload but it does have one great advantage. The interlocking edges of the camera body and the detachable back eliminate the need of any lightseal (light only travels in straight line) and thus, after almost 40 years, this camera is still light tight!

Since we have openned the back, let’s take a more detailed look of the inside. The film cartridge is placed on the right because of the left-handed winding lever (and thus, taking reel on the left). There is also a “secret” battery compartment above the cartridge slot to house a PX625 mercury battery for the meter (see photo below). I use a hand-held meter (the Zeiss Ikon in earlier post) with this camera myself but if you want to use the built-in meter, replacement for the banned PX625 can be found on the Internet (probably a zinc-air one with similar voltage).

All Rollei 35s are great mechanical workhorses that should last years if being used and kept properly. Its super compact size, the fast lens with large amonut of depth of field (compared to a 50mm) and an almost silent shutter make this camera a great candidate for street photography. It would also be a nice vacation camera for an experienced photographer who wants to leave his/her heavy pro-SLR/DSLR system at home. Many of the models in the Rollei 35 series are also highly collectible and generally retain their values in the used market. The German made 35 Originals have higher values in the second hand market than their Singapore made siblings. However, from a pure user point of view, there is basically no difference both in optical and mechanical quality. Also, the 35S/35SE equipped with the faster and higher quality 40mm f2.8 Sonnar would of course hold better value than the Tessar equipped 35/35T/35TE. Similarly, The Triotar triplet equipped 35B/C35/35LED are of less value then the models with the Tessar lenses but these economical models are also great cameras and the Triotar is one the sharpest triplets ever produced!

Well, how about some sample photos? Both were shot with Ilford HP5+ exposed at ISO250 with regular development in DD-X. (sepia toning of the bottom image is digital effect applied on film scan) 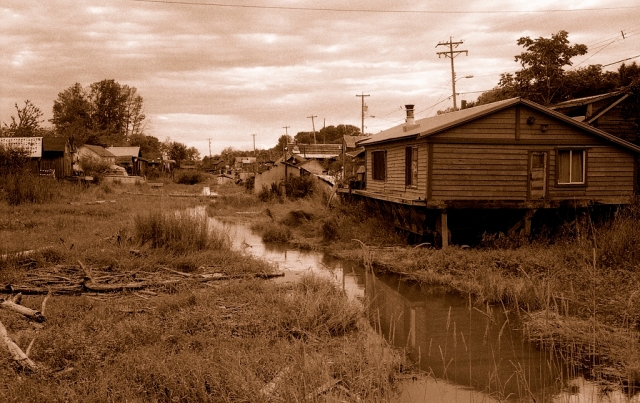 This is actually my second Rollei 35 as I have bought a 35LED earlier but it had been given to a friend to complete his collection. This Rollei 35, on the other hand, is a birthday gift from my wife.

Heinz Waaske (left on photo above) was born in Berlin, 1924 and had been contributing to the camera industry with his ingenious camera designs through out his life til his death in 1995. Beside the famous Rollei 35, Waaske also designed other cameras, some before the Rollei 35 (e.g. the Edixa 16 sub-miniature camera) and some after it (e.g. the Rollei A110). Another famous camera designed by him is the Rolleimatic that was held in the hands of Waaske in the photo above. Most of these cameras aim for compactness, precision, practicality and also affordability. It is based on his design philosophy, Henize Waaske himself opposed the idea of making special editions Rollei 35 out of expensive but unnecessary materials like gold, platinum, lizard skin.

This entry was posted in Viewfinders. Bookmark the permalink.